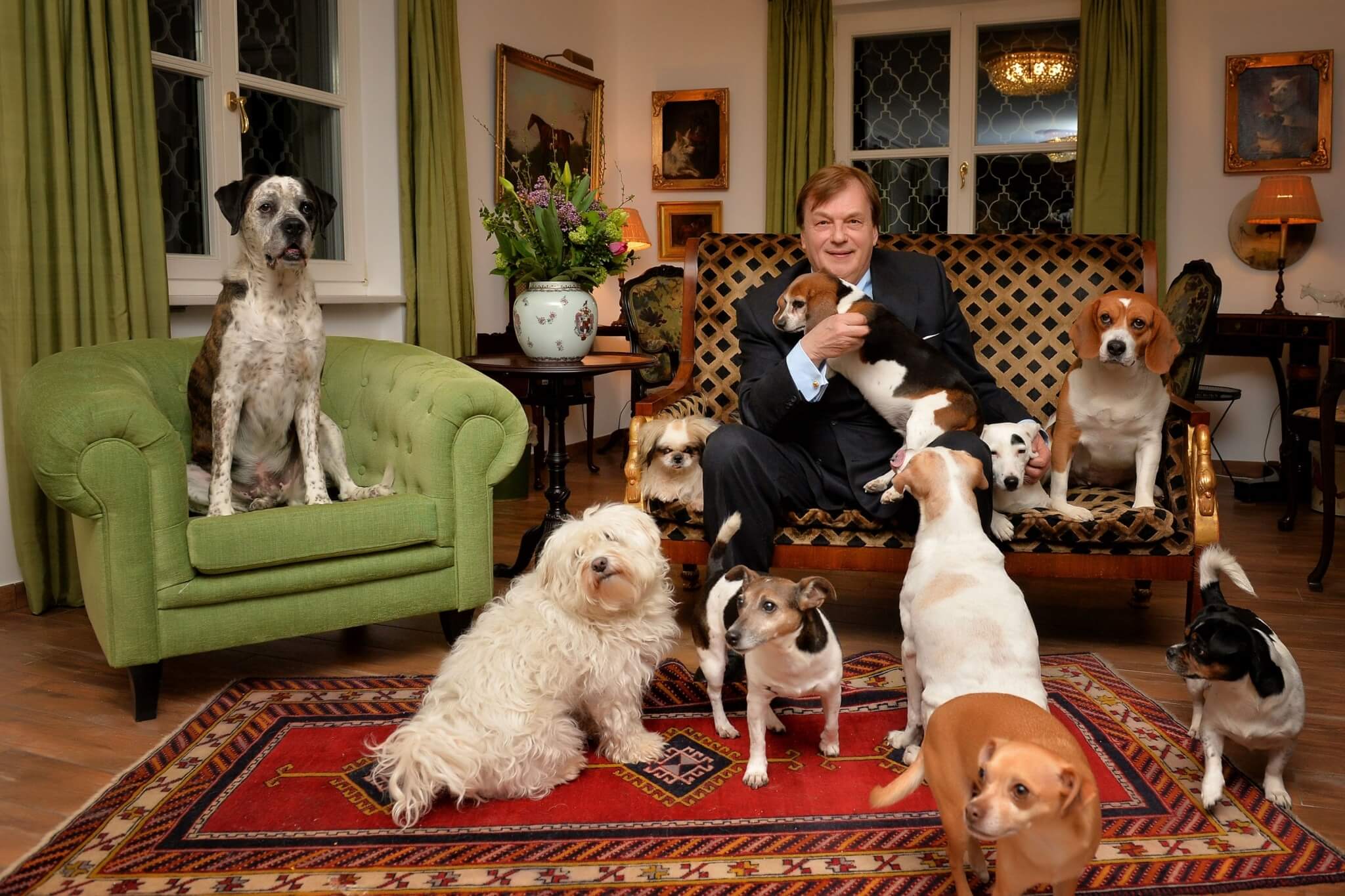 Michael Aufhauser was born in Augsburg on 25 April 1952. He graduated from the Zerboni acting school in Gauting near Munich. His three-year training was followed by engagements in a television series, films and theatre.

After three years as an actor, he decided to switch to the tourism industry. First in Europe, then worldwide, Michael Aufhauser developed innovative tourism programmes and became vice-president of a large company in Boston. 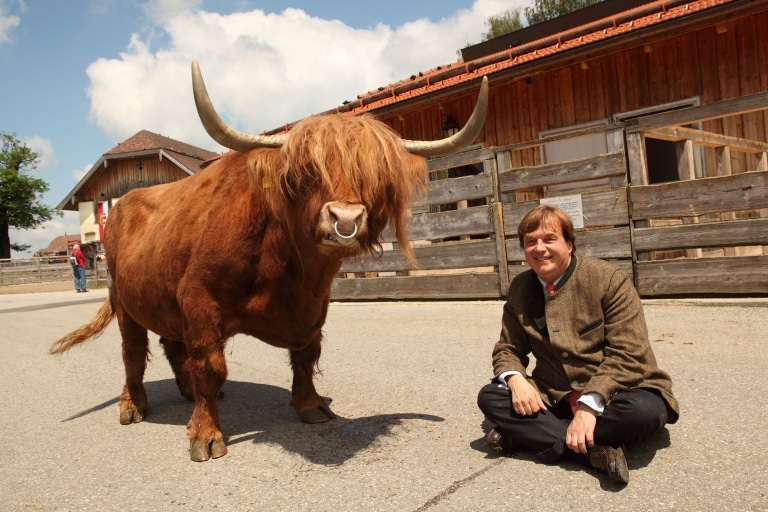 The road to animal welfare

The transformation and the path to animal welfare began when Michael Aufhauser observed dog catchers taking away street dogs from his office window on the Costa del Sol in 1991. He decided to go after them. Shortly afterwards, he witnessed a gruesome gassing of about 40 dogs and cats. He bought the remaining animals, which were to die in the next gassing, and arranged for their accommodation and placement.

The foundation stone for his further vocation was laid, and over the next few years Michael Aufhauser was able to save more and more animals from a terrible fate. Together with the animal protection organisation "Pro Animale" and his long-time companion Irene Florence, he saved more than 1000 animals in the following years. In addition, he tried to draw attention to the catastrophic situation of many animals in the media - for example, he raised awareness of the abuses in Spain in the ARD programme "Das Leid der Tiere".

However, it soon became clear to Michael Aufhauser that the animal rescues could only combat the symptoms. However, in order to improve the situation of the animals in the long term, it was necessary to return to the source...

From now on, Michael Aufhauser is concerned with an all-encompassing humanity that also includes our animals and nature. He points out grievances and proposes solutions. He sits at the table with those responsible for animal suffering. His great goal becomes ever clearer to him. It is a matter of reminding all people again and again that animals are not objects but sentient creatures. If this realisation is imprinted on people's minds, laws will be changed and animal suffering will be reduced. 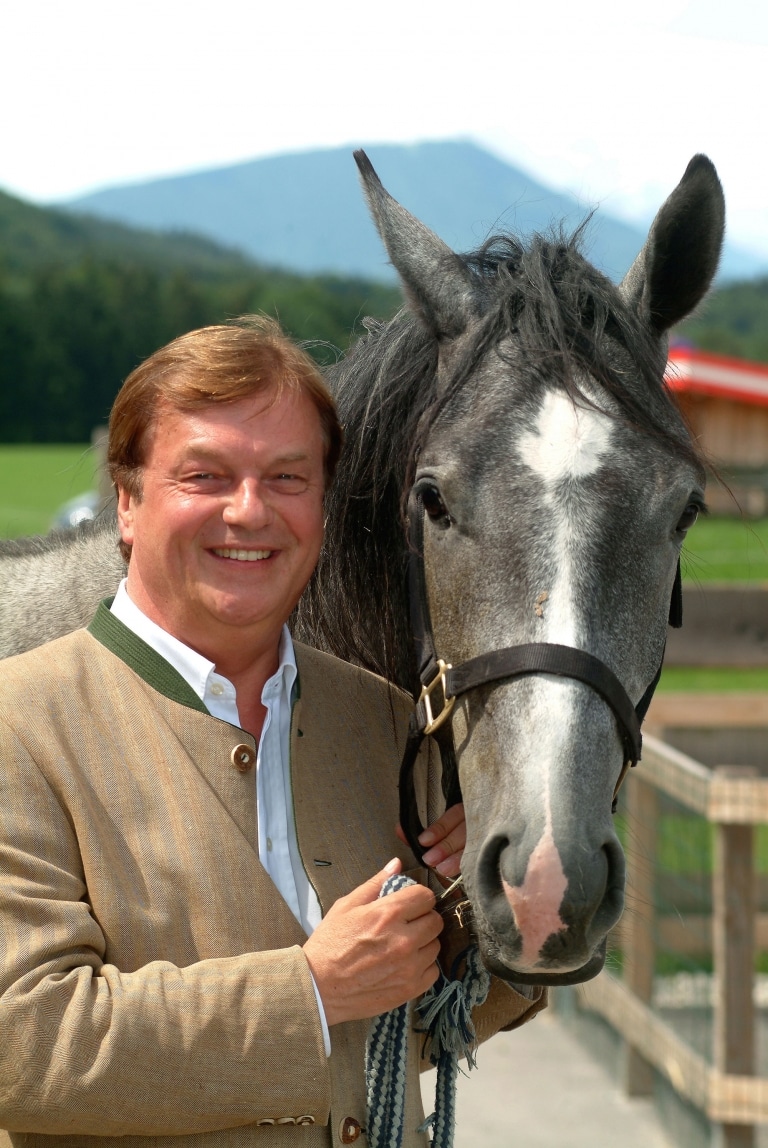 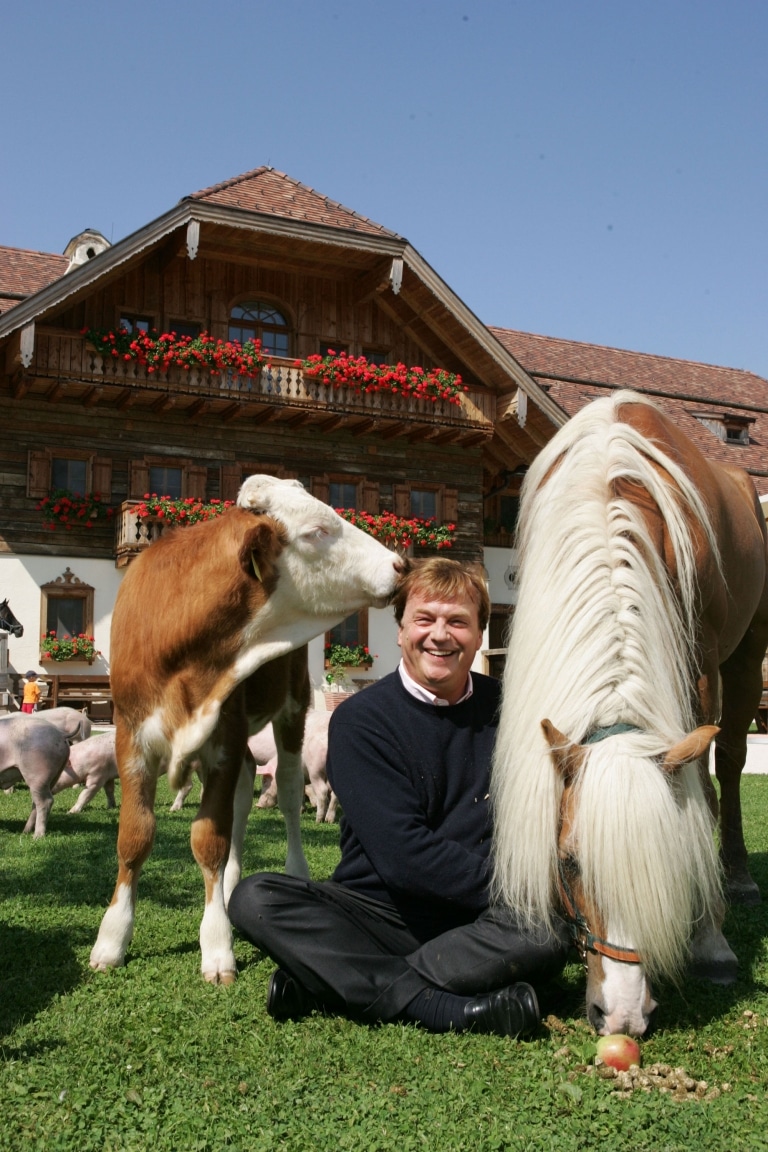 The genesis of Gut Aiderbichl

The objective was clear, now a place had to be found that would be suitable for implementation. For this reason, Michael Aufhauser and Irene Florence looked for a location that would be suitable for housing his private horses on the one hand and for the stables of the animals that had been rescued in the meantime on the other. At that time, more than 25 animals had already been rescued from precarious situations - and the number was increasing. Through the contact of a bank director, it came to the purchase of the beautiful property above the Wallersee in Henndorf. As the construction of the beautiful buildings is a unique project in the area, many people were already curious at the time of the construction, which is why there were many interested visitors.

From a regional point of view, Gut Aiderbichl received a great deal of attention. Also in the media. Animal rights activists got in touch and in 2001 proposed a service of all denominations for animals. The animals were hit very hard at that time, especially the cattle. Millions were senselessly "culled" and with the reporting on the service, the treatment of these animals and the backgrounds were illuminated. The place Gut Aiderbichl developed into a medium in the sense of the animals, but also became a contact point for people who wanted to help animals in need but did not know where to house rescued animals. Soon the existing stables had to be expanded. Irene Florence was still able to accompany this development, but passed away in 2002. 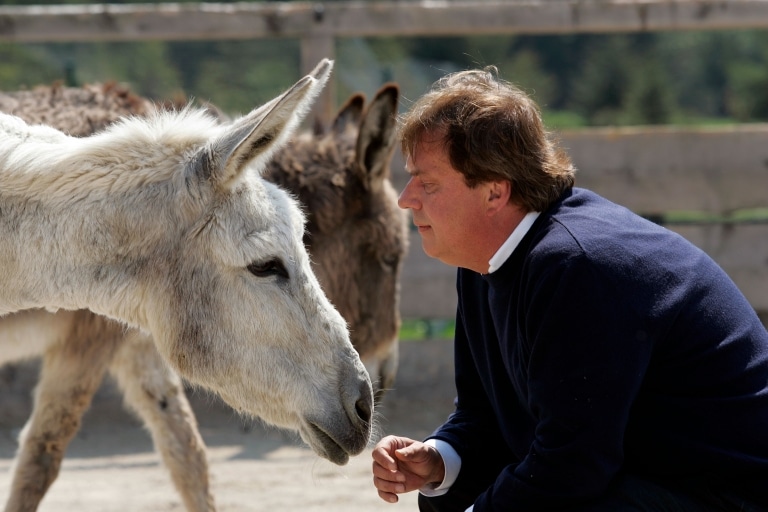 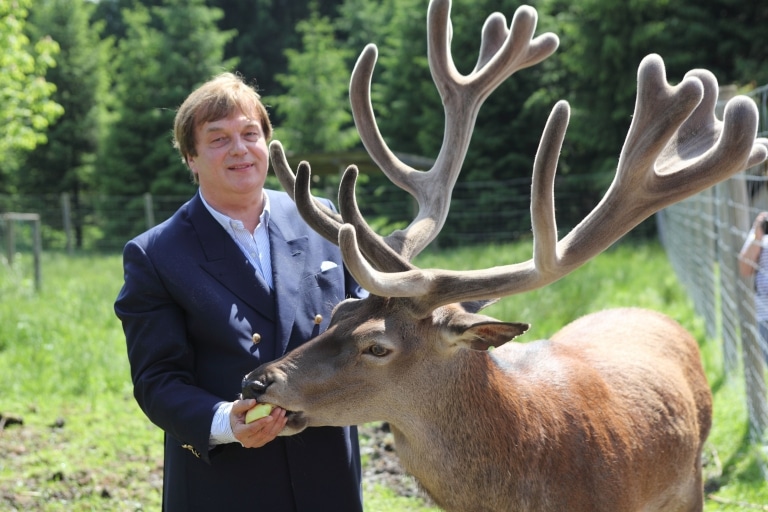 Michael Aufhauser now had to develop a concept on his own on how to secure an estate of this size economically in the long term. For this reason he founded a management company and a charitable foundation and created a strong team to manage Gut Aiderbichl from now on. Dieter Ehrengruber and Friederike Grünthal offered the management.

The number of rescued animals at Gut Aiderbichl grew dramatically and the first outdoor farms were established. It is of indispensable importance to Michael Aufhauser that large animals such as horses and cattle, but also pigs, goats and sheep, are not placed in good faith with places that have a different goal in terms of husbandry or purpose of keeping than Gut Aiderbichl. Michael Aufhauser's approach was very much influenced by the founder of the association "Pro Animale", Johanna Wothke, in years of cooperation. She promises the animals she takes in a life in which they will never again experience fear and stress. An important role model for animal husbandry at Gut Aiderbichl. 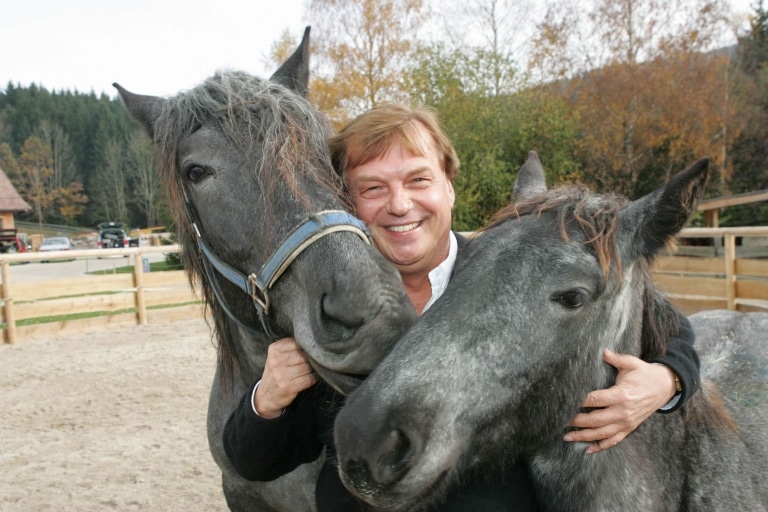 When horses and other large animals are allowed to stay at Gut Aiderbichl for the rest of their lives, this places particularly high demands on their keeping. They should feel just as happy as they do with private owners who offer them ideal conditions. This takes a lot of effort and requires exceptionally good staff with excellent training.

Michael Aufhauser's main concern was to be able to help animals in need on a large scale. The size of the estate itself was not the main focus, but rather sufficient capacity. It is thanks to his know-how, professional commitment and his feeling for people and animals that Gut Aiderbichl was able to grow and establish itself for this purpose. Many thousands of animals have benefited from this - until today.

Michael Aufhauser's tireless efforts were entirely voluntary for Gut Aiderbichl. Income from his rights to books, films and other productions also goes entirely to the Gut Aiderbichl project and thus exclusively benefits the animals.

His most important message has remained to tell people: "Animals are not things, but sentient fellow creatures. They are capable of suffering just like we are.

Since his serious illness in May 2015, Michael Aufhauser no longer takes an active part in Gut Aiderbichl's activities, but continues to be in the recovery phase. 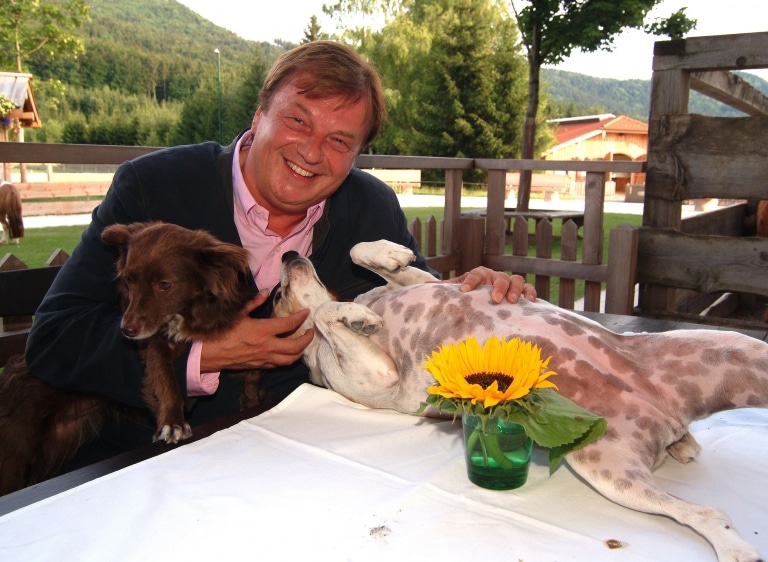 In order to achieve the goal he and his many co-workers have set for themselves, a change in thinking towards the weaker members of society, especially towards animals, who are being hit particularly hard at the moment, a large public must be reached. This happens permanently.

Michael Aufhauser has been a guest on many TV programmes (Kerner, Nachtcafe, etc.). Prominent companions also contribute to spreading the idea and philosophy of Gut Aiderbichl. His two books "Rethinking with Heart" and "Save the Animals!" published within a year became bestsellers. His column "Eine Frage der Menschlichkeit" (A Question of Humanity) appeared for many years in the weekend edition of the Münchener tz, as did his full-page "Akte Tier" (Animal File), which also appeared every Wednesday in the same newspaper. In Austria, his column "Gedanken mit Herz" was published weekly on Wednesdays for many years in the Salzburg Kronenzeitung.

Michael Aufhauser has created free-wheeling parks for dogs and made a significant contribution to animals being given constitutional status in the state of Salzburg. In addition, Michael Aufhauser has facilitated encounters between disabled people, hospice residents and old people with animals, for whom contact with animals brings some light and joy into their difficult life situations.