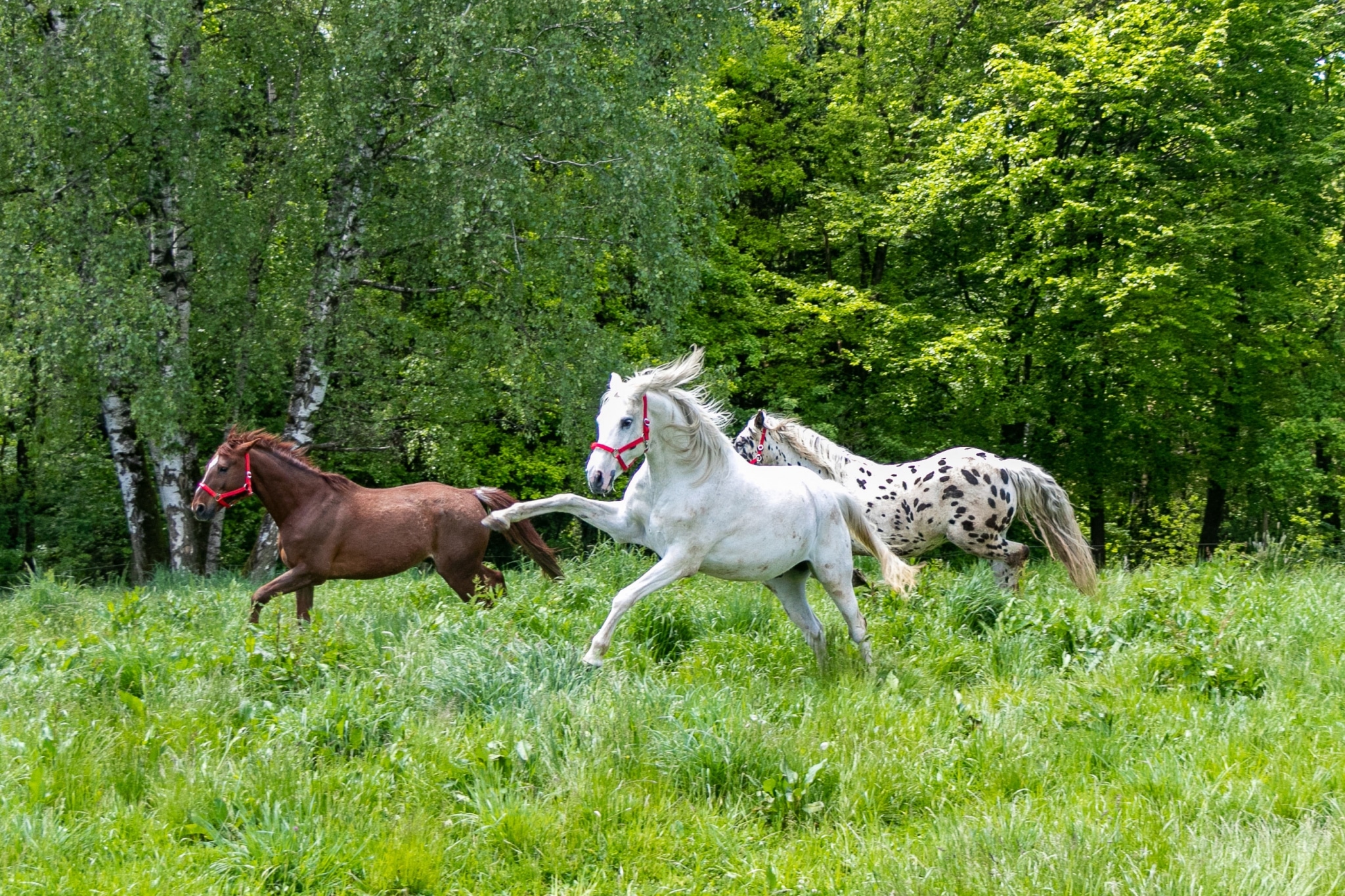 An essential role for increasing the quality of life

Horse husbandry plays an essential role in increasing the quality of life of old horses. There is still not enough knowledge about feeding old horses according to their needs. Therefore, it's more and more important to create a healthy ecosystem between grassland and grazing animals, in order to permanently improve the well-being of old horses.

Basis/starting point: Modern horse husbandry forms are characterized by the fact that the animals are motivated to constant movement by spatial separation of areas into different functional areas. The so-called paddock trails are outdoor horse facilities that implement the above-mentioned principle in a particularly consistent manner; recreational areas such as a resting hut, watering hole and feeding trough are laid out at a distance from each other and connected by walkways. The animals' natural movement pattern, achieved in this way, promotes their health and harmonious coexistence within groups of horses.

To protect the turf and for reasons of animal health and safety, these walkways must be paved, if the paddock trail is to be used year-round. However, this is contrary to the interests of the protection of cultivated land. For example, in Switzerland, cantonal land-use planning authorities do not grant any, or only limited permits, for paddock trails with all-weather paved walkways in the agricultural zone. 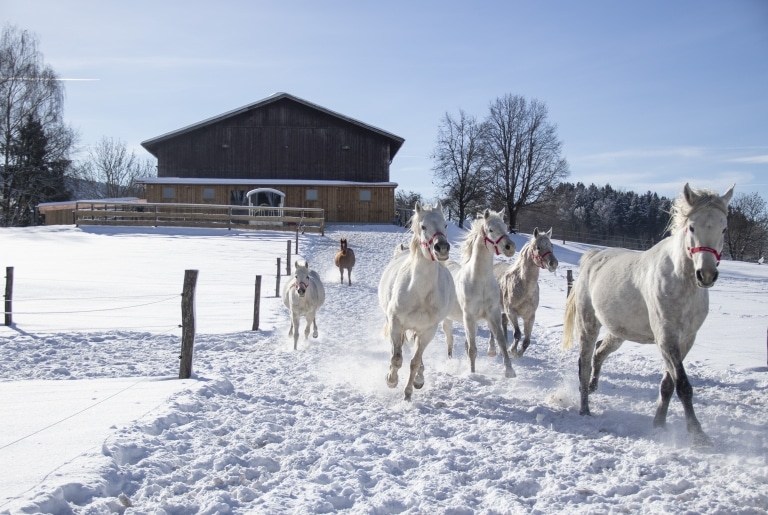 Target: In order to resolve this conflict of goals between animal welfare and cultivated land protection, this project aims to develop solutions for soil-conserving trail or run stabilization that meet both animal welfare and spatial planning interests (no permanent encroachment on valuable cultivated land, especially on crop rotation areas FFF in Switzerland). For this purpose, the effectiveness of selected fastening variants will be investigated, taking into account animal welfare, vegetation and stress intensity. In particular, the regeneration and recultivation of the soil, after two years of exposure to the animals, are monitored.

In addition, as a side project, a cross-sectional study is being conducted with snapshots of soils from various existing practice farms with paddock trails to assess the effects of exposure under different paving materials and management measures.

Outlook: The construction measures (installation of walkways, pasture shelters, feeding troughs and drinking troughs, fencing) are planned on an ongoing basis as soon as the building permit has been obtained. The 20 test horses will be brought in and thus the systematic loading of the soil stabilization should be possible from August 2022, depending on the weather conditions.

On modern grasslands, many horses suffer from welfare diseases. These grasslands originate mainly from cattle farming. They are too rich in energy and protein for horses. By no means, they are steppe grasses. In addition, science is becoming more and more aware that the ancestors of our horses came from the steppe, but primarily populated the savannahs created by large herbivores. The small-scale mosaic of vegetation in savannahs offers wild grasses, many medicinal herbs, protection from the weather under trees and mineral-rich supplementary feed from the leaves of bushes. The projects at Gut Aiderbichl record the current condition and characteristics of the areas, derive their possible potential from this and look for ways to create a near-natural, species-rich forage area for the benefit of the existing horses.

Biodiversity and toxic endophytes in the meadows and pastures

Basis/starting point: Gut Aiderbichl has the declared aim of promoting not only animal welfare, but also species conservation.

Microscopic fungi that live symbiotically in plant tissue - so-called "endophytes" - often take meadow grasses as their host. They make the plants more robust and productive, but can damage the health of grazing animals in the long run; horses are particularly sensitive to the toxins (poisons) produced. The activity and effects of endophytes on grazing animals depend on diverse ecological factors that also influence biodiversity in meadows and pastures. Such habitats have suffered great biodiversity losses in the last century, mainly due to intensification, especially overfertilization and overgrazing.

While the problem of toxic endophytes has long been known and intensively studied overseas (especially in North America and New Zealand), it has received little attention in Europe. Furthermore, the ecological significance of these associations is still unclear.

With this in mind, an international study was launched to provide a data basis on the effects of toxic grass endophytes on grazing animals on the one hand, and to investigate the biodiversity of Gut Aiderbichl's areas on the other.

Objectives: At various Gut Aiderbichl sites in Germany, Austria, France and Hungary, meadows and pastures will be examined from a vegetation ecology perspective, and plant samples will be collected for toxicological laboratory analyses. The project will thus provide an insight into the botanical species composition, ecological site conditions and occurrence of toxic endophytes in the investigated sites. In this way, the ecological potential of the used meadows and pastures can be developed in the future and, at the same time, a diet adapted to the needs of the animals can be ensured.

Results: Valuable insights have already been gained from the initial 2021 work:

Species characterized by frequent symbiosis with toxic endophytes were observed in almost all recording plots, and averaged about one third of the total vegetation cover. The presence of toxic endophytes was confirmed by laboratory analysis at two sites in Austria and France, with red fescue and german ryegrass as hosts. Furthermore, the frequency of toxic plants for horses (e.g. groundsel and buttercup) could be quantified on the investigated sites, and particularly problematic areas could be identified.

The recording areas were species-poor on average at all sites investigated so far, presumably due to intensive use. However, certain natural values are present, as evidenced by the occurrence of isolated endangered or potentially endangered species as well as selectively above-average species numbers in horse pastures. This study thus provides a basis for the conception of measures to protect and enhance the meadows and pastures of Gut Aiderbichl's land.

Outlook: The project will continue in 2022, with a focus on mowed meadows of varying ecological quality. This investigation should complement an ongoing study on the nutritional value of the hay obtained. Furthermore, ecological enhancement measures in Gut Aiderbichl France will be planned on the basis of the findings obtained in 2021, which will provide for long-term impact monitoring.

Basis/starting point: Climate change and the loss of biodiversity and species diversity in our pastures, due to intensification, are a reality in agriculture. Horse owners are not exempt from this, and solutions that take these facts into account are highly appreciated. Gut Aiderbichl, which manages many farms and pastures, has decided to address this problem in a multidisciplinary project. Moreover, nowadays many pastures are shadeless and this poses a problem for horses, especially with the increasing global warming, because they need shade to protect themselves from the sun, insects and heat. However, not all tree species are equally suitable to provide shade as an agroforestry element in horse pastures.

This project was initiated in the spring of 2021 with an analysis and compilation of plant species and trees that would be suitable for horse pasture, increase native biodiversity in agricultural areas, and also be as resilient as possible to climate change-induced weather variability.

Target: Two different species-rich horse pasture seed mixtures were specifically developed with the goal of combining biodiversity promotion with species-appropriate nutrition for older horses. To do this, one mix would be created for drier conditions and one mix for wetter conditions. The combination of these two mixes will also serve for the frequent fluctuating weather conditions of climate change. This study will also address options for shading pastures with native tree species in a theoretical section.

New findings: In an experimental field, these pasture seed mixtures were sown in summer 2021. A first botanical analysis in May 2022 showed a similarly high species diversity for both mixtures, but twice the proportion of herbs in the dry compared to wet mixture. A second botanical analysis will now be conducted in August 2022, with pastures mowed and quality parameters noted. In a feeding trial, the pasture will be grazed and/or hay fed to horses to investigate potential preferences of horses for the different plant mixes.

Outlook: First results are expected in December 2022 and will be published here. A recording in spring 2023 should provide information on whether the pasture seed mixtures used have become stably established and are appreciated by the horses.